Sal Bertollini, or Colonel Stars, was 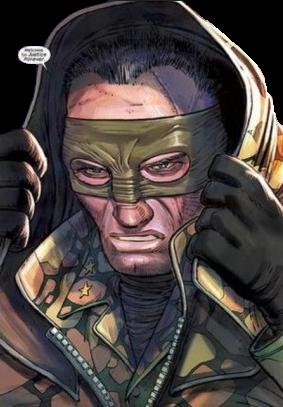 the leader of Justice Forever. He was formerly a member of John Genovese's crime gang, but became a born-again Christian sometime afterward, along with his brother, Lieutenant Stripes.

Sal had shown an extremely stern and intimidating demeanor, but was, in truth, a kind man who fought purely for justice. He was eager to lead Justice Forever, and he became even more so once Dave Lizewski had joined the group.

He introduced himself to Kick-Ass as the leader of a superhero team known as Justice Forever. Kick-Ass joined the group, and, after which, the team led an attack on an apartment which had been rumored to be a front for prostitution. Sal had his men attack the lowlifes that infested the apartment, and had his guard dog, Sophia, disable the head of the prostitution plot by signaling the animal to bite down on the man's testicles. After the rescuing the prostitutes, Sal had promised the man that if he had heard any other rumors about the apartment, he would crush him.

Soon, after Justice Forever had gained more and more members, Sal was attacked by Motherfucker, the son of the deceased gang lord John Genovese, as a way of getting revenge on Kick-Ass, his nemesis. Motherfucker, along with his team of supervillains (the Toxic Mega-Cunts), then killed Sal, beheading him and substituting his head with that of an also-deceased Sophia.

He and Sophia were the first victims of Motherfucker's rampage.

Community content is available under CC-BY-SA unless otherwise noted.
Advertisement